Results from a new survey have confirmed that there is a broad lack of awareness of lupus in the UK which contributes to widespread public misconceptions about the autoimmune disease. The lack of understanding of this often life-changing and potentially fatal disease contributes to the stigmatisation of people with lupus, often leaving them feeling isolated.

Of all the many possible health effects, respondents were most familiar with kidney failure as a complication of lupus. This improved recognition may be due to celebrities like Selena Gomez speaking out and shining a spotlight on lupus.  Gomez announced last September that she had a kidney transplant after lupus severely damaged her kidneys.  The survey found approximately 40% of respondents aged 18-34 were aware that kidney failure is a frequent complication of lupus, possibly due to their higher exposure to discussions on social media. Further key findings from the survey can be found HERE.

In an additional online survey of LUPUS UK supporters it was revealed that almost two-thirds (64.7%) of respondents first heard about lupus when either they or a family member were first diagnosed with the condition. 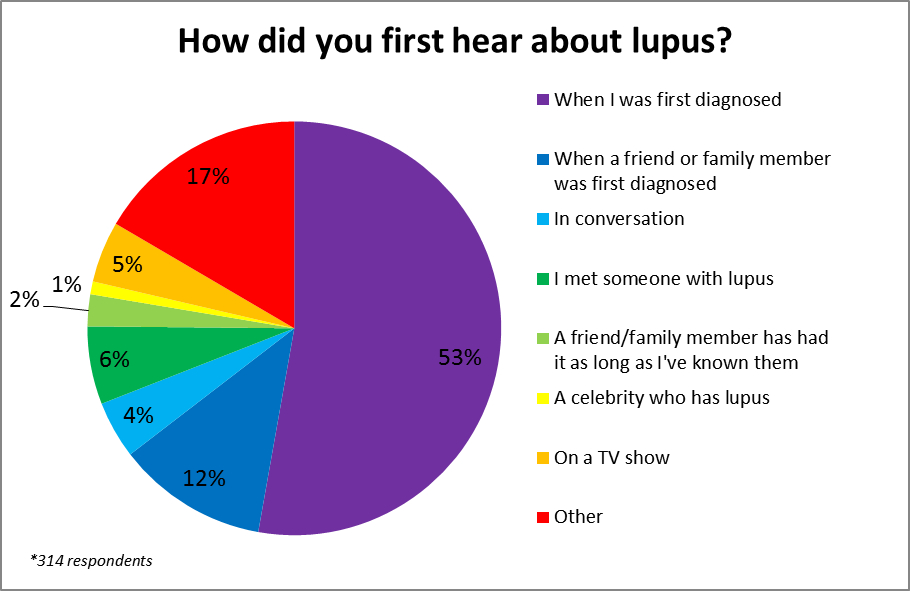 “I’d never heard of it until it was mentioned to my dad. We came home, googled it and got frightened, but I also had a feeling that I had it too. The skin hospital tested me too and, low and behold, we both had it.”

Approximately 1 in 1,000 people in the UK have a form of lupus; an incurable disease with a wide range of symptoms that can impact on every aspect of the lives of those living with it.  Lupus causes inflammation that can damage any part of the body, potentially leading to organ failure. World Lupus Day on May 10th is a global observance which serves to unite people affected by lupus and raise awareness of the impact that this poorly understood disease can have.

About the Survey
The survey was commissioned by GlaxoSmithKline (GSK) which has shared the results as part of its commitment to supporting the World Lupus Federation (WLF) and helping to improve the lives of people living with lupus. A 2016 survey commissioned by GSK identified similar low levels of awareness and widespread public misperceptions about lupus.  With little change over the past two years, WLF member organisations recognise they must do more to improve public understanding.