Home \ Information for Medical Professionals \ Diagnosis & Treatment \ Introduction to Lupus \ Genetics & Lupus
This site is intended for healthcare professionals as a useful source of information on the diagnosis, treatment and support of patients with lupus and related connective tissue diseases.
Return to GP Guide

It is now well understood that lupus is caused by both environmental and genetic factors. Currently, we estimate that genetics explains between 40% - 60% of the risk for lupus across the world. The genetics is not simple. This is not Mendelian disease caused by a mutation in a single gene; at least 80 genetic regions (termed loci) are associated with lupus and large genetic studies suggest there are more to find. Lupus is a truly polygenetic (many genes) disorder. The combination of both environmental and multiple genetic factors means that this is one of the many diseases termed “complex”.

Twelve years ago there were less than 10 genetic loci known to be associated with lupus, generally these were discovered by family studies. The reduction in genotyping costs and the creation of a map of the human genome at the turn of the century, has led to large (thousands of people with SLE and healthy controls) genetic studies that use information on a million or more genetic variants that span the whole genome. The comparison of allele frequencies at these genome-wide variants between cases and controls, termed genome wide association study (GWAS), has enabled the discovery of much common (seen in the population at a frequency of > 0.1%) variation associated with many diseases. There have been three large Lupus GWAS in Europeans, three in Southeast Asians and one in Hispanics. These studies together have robustly identified over 80 genetic loci associated with lupus. Most of the lupus associated loci lie outside of protein coding regions of the genome. These regions alter the activity and regulation of genes (termed gene expression). Genetic differences in these non-coding regions alter gene expression.

Thus, genetic factors that increase the risk of developing SLE largely act by altering gene expression in immune cells.
It is important to note, therefore, that there is no such thing as the “Lupus gene”.

There are a few rare examples where a single gene can exert a large risk of disease; in general, many genetic loci are involved in the disease, most of these lie
outside of genes and any particular one is not sufficient for the development of lupus. Each genetic locus associated with lupus may contain many polymorphic sites each with, usually, two alleles one of which is risk for lupus. Lupus patients have a “high load” of lupus-risk alleles meaning that they carry more lupus associated alleles than people in the general population without lupus.

The definition of heritability is the proportion of a disease explained by genetics, the rest is environmental. Due to difficulties in accurately measuring this, a simplification is made and the proportion explained by additive genetic factors is usually presented. Early studies in European families estimates the heritability to be 66%, however, a recent very large study in Taiwan, which included virtually the entire population’s medical records, estimated the heritability to be 44%. It is important to note that lupus is a complex disease and heritability is a population level statistic. The heritability of the disease is not informative for individuals wishing to know if they or their family members are likely to develop the disease. It is true that lupus runs in families, and that family-based statistics are used to estimate heritability but, currently, there is no useful method for accurately predicting lupus diagnosis within specific individuals. We do know that siblings of those with SLE have a higher risk overall, as compared to the general population, with the sibling risk elevated about 20-30 fold. The relatively low prevalence of SLE (1 in 5,000) is such that this elevated overall risk still means that the individual risk of a family member remains modest. As discussed above, if an individual has SLE it is likely they have inherited a high load of risk alleles and so it is also likely their siblings and extended family members will have a high load, though not necessarily made up of exactly the same variants. Families which include people with lupus generally harbour a higher load of lupus causing genetic factors (termed alleles) than the general population. Lupus patients will have a load of risk alleles in excess of a threshold necessary for disease and, therefore, their relatives are also more likely to pass this threshold. However, until we have a better understanding of the disease-causing genetic loci and how these are involved in specific lupus phenotypes, we are unable to predict disease outcomes accurately. These types of studies are currently being undertaken. Some of the genetic factors that augment the risk of developing SLE also increase the risk of developing other autoimmune diseases. This explains why patients with SLE have an increased chance of developing diseases such as autoimmune thyroid disease and, furthermore, why the family history of a person with SLE may reveal rheumatoid arthritis or other autoimmune diseases.

What have we learned from genetic studies?

Before GWAS it was not known how many genetic loci were involved in the disease, and many guesses for particular genes being strongly involved in the disease process were wrong. GWAS has shown us that there are likely hundreds of polymorphic sites associated with the disease, although the risk conveyed by many is numerically very small. These sites seem to be found uniformly across the genome. There are, however, some loci that are more strongly associated than others and carry more risk variants than average. The Major Histocompatibility Complex (MHC) on chromosome 6 is by far the most strongly SLE associated locus in the genome where we see the largest differences in allele frequencies for SLE risk variants between cases and controls. However, even the associated sites in the MHC have disappointedly low relative risks, which is a characteristic of GWAS in complex disease. The vast majority of SLE associated variants have relative risk estimates below 2. As discussed above, this is a polygenetic disease where multiple risk variants lead to a high load that leads to disease when a threshold is exceeded. Any one variant is not very predictive of disease. With more and more variants being discovered as associated we are beginning to build predictive models using what are known as polygenetic risk scores (PGS or PRS). From a clinical perspective, the findings from genetic studies have highlighted multiple abnormalities in the immune system of lupus patients, this includes altered activity of B and T lymphocytes, as well as more active monocytes. One of the most outstanding disease pathways where genetics plays a role is in aberrant interferon production. This observation has supported the concept that aspects of lupus pathogenesis are similar to a viral infection.

An important avenue of research into the polygenic nature of lupus has led to the conclusion that severe disease (such as organ involvement) may arise though an extremely high load of genetic risk alleles rather than specific functional mechanisms leading to specific organ involvement. Rather, it is an excessive load of lupus-risk alleles that create a more severe lupus phenotype of which organ involvement is very common.

Lupus is approximately 9 times more common in women than men. The reasons for this are believed to be both genetic, involving the X chromosome, and environmental, involving sex hormones. Hormonal involvement is evidenced by the fact that lupus is uncommon before the menarche and, in most cases, also relatively mild when it occurs post menopausal. Women have two copies of chromosome X (men have one copy) and there is evidence that this double dosage of chromosome X in women increases the risk of SLE. There are further studies highlighting hormonal involvement. Both in vitro and work in animal models suggest that oestrogens, in particular, have a pro-inflammatory effect and are liable to make lupus worse, whereas the opposite is observed with androgens and, to a lesser extent, progesterone. The genetics may be complex. While females do have two copies of chromosome X, genes on one of the X chromosomes is inactivated. Recently, it has become apparent that some genes on X escape inactivation. One recently discovered lupus associated locus on chromosome X is in an area that escapes inactivation, adding to the evidence that a dosage effect on chromosome X increased the risk for lupus in females. It is likely that many more discoveries are yet to be made on the genetics of chromosome X as the sex chromosomes were not well covered in genotyping chips used in GWAS over the last decade. This is now improving and we are entering a phase of increasing association discoveries on this chromosome.

The prevalence of lupus is observed to be higher in Afro-Caribbean’s, African Americans and Asians than in those with European ancestry. Looking over multiple studies it seems that lupus is approximately 2-4 times more common in nonEuropeans with African ancestry likely to lead to the highest prevalence. Recent genetic data has shed some light on variation on prevalence. Large metaanalyses of GWAS data have shown that the genetic load of lupus-risk variants is correlated with prevalence over ancestry, more specifically, the Chinese population have more lupus-risk alleles than Europeans and populations of African ancestry have still higher load. One interesting finding from genetics is that the genetics of the disease looks similar across ancestry. In particular, it has been observed that populations of Chinese ancestry share the same lupus genetic risk loci as Europeans. So, it may not be differences in disease predisposing loci involved in the disease but rather the frequency of risk alleles at these loci that leads to differences in prevalence of lupus in non-Europeans.

Lupus is a complex disease caused by both genetics and the environment. We currently estimate that genetics explains between 44% - 66% of the disease risk. It is important to understand that lupus is almost never caused by a single gene, as there are hundreds of areas of the genome found to be associated with the disease. In fact, it is rarely genes that are found to differ between SLE patients and healthy controls. Rather, we observe differences in areas of the genome involved in regulating when and where genes are expressed.

Women are approximately 9 times more likely to develop lupus. This is likely explained in part by hormonal effects, but there is strong evidence of a dosage effect with the X chromosome. Lupus prevalence varies across the world and it is observed that populations of non-European ancestry have a relatively
higher rate. These differences may, in part, be due to genetics. We observe higher frequencies of genetic risk variants for lupus in Asians than Europeans and higher still in Africans. Large genetic studies over the last decade have informed us of more than just the polygenetic nature of lupus. While we are still some way off in determining all the true disease-causing sites in the genome, the evidence so far points towards altered B and T lymphocyte activity, increased activity of monocytes and aberrant interferon production.

The complexity of lupus genetics should not be seen as a negative, rather, it highlights the complex nature of the immune system which must be both adaptive and stable. The biology of immunity allows perturbations that, taken by themselves, may cause a small change in risk, but this can be overcome by related biological pathways. A genetic variant that had a large effect would be unlikely to survive in the general population, so we are left with many genomic sites that vary between individuals and lead to altered risk. The clinical complexity of the disease is reflected in this genetic complexity and supports the idea that as treatments become more specific, multiple and varied approaches will be required across the lupus spectrum to control this disease.
Dr David Morris and Prof Timothy Vyse
Department of Medical and Molecular Genetics
Faculty of Life Sciences & Medicine
King's College London School of Medicine
Guys Hospital, Tower Wing
Great Maze Pond
London, SE1 9RT 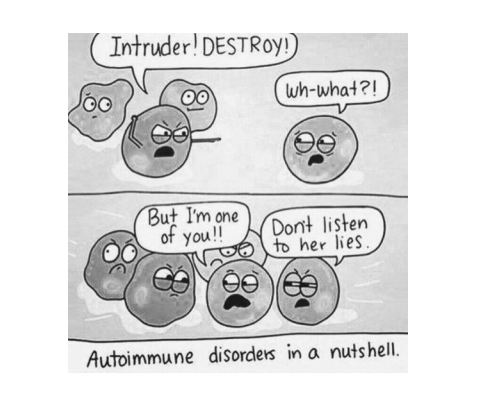