Philip Dunne MP, Minister of State for Health has announced that NHS England will develop an implementation plan for the commitments outlined in the UK Strategy for Rare Diseases that it can influence by the end of the year. For those commitments that are outside of the scope of NHS England, the Department of Health will support its arm’s length bodies to coordinate plans for implementation.

This is a fantastic result for patients and families affected by rare, genetic and undiagnosed conditions in England and across the UK, and will provide the rare disease community with an effective tool to hold the Government to account to improve services and care for patients.

The announcement came during a debate on the implementation of the UK Strategy for Rare Diseases, which was held on  Tuesday 28th March 2017 in Westminster Hall, House of Commons. A number of MPs, representing patients from across the UK, took part in the debate, tabled by Ben Howlett MP who chairs the All Party Parliamentary Group (APPG) on Rare, Genetic and Undiagnosed Conditions.

Ben Howlett MP kindly name-checked LUPUS UK in the opening of his debate;
“I want to pause to thank all the charities and organisations across the country—including the Centre for Rare Diseases in Birmingham, the Birmingham children’s hospital, LUPUS UK and Muscular Dystrophy UK—that have not only submitted evidence to our report, but done so in advance of this debate. Although I cannot name a million and one organisations, given the limited time, I—and, I think, the whole Chamber—wish to thank them for all their work on helping patients with rare, genetic and undiagnosed conditions.”

Daniel Zeichner MP for Cambridge also cited lupus in his speech;
“I recently joined Dr Bradley and Professor Lucy Raymond, Professor of Medical Genetics at Cambridge, to celebrate Rare Disease Day at an illuminating roundtable with patients and practitioners. We heard case studies that highlighted some of the very difficult challenges that patients with rare diseases face, including practical difficulties with the benefits system. I was particularly struck by meeting a patient who suffered from lupus. She explained that she had good days and bad days—something that the welfare system just cannot cope with, making her already difficult life even harder. The message that I came away with—apart from the important links to the genetic sequencing work being done at the Sanger and the need to identify the right people to test—was that research into rare diseases not only helps with those diseases, but leads to discoveries with a much wider application.”

Other MPs also spoke at the debate including those from Northern Ireland; Jim Shannon and Margaret Ritchie, Scotland; Martyn Day and Stuart Blair Donaldson and England; Mark Pritchard as Chair, Chi Onwurah, Greg Mulholland and Andrew Bingham. The Shadow Minister for Public Health Sharon Hodgson strongly put forward her support for implementation as well. George Howarth MP for Knowsley in Merseyside also made a valuable contribution in his speech in terms of the lack of awareness of rare diseases within the medical field itself.

The Minister for Public Health & Innovation, Nicola Blackwood, was not in attendance, but there in spirit whilst accompanying the Prime Minister. She was praised for bringing about the Implementation of the Strategy for Rare Diseases in England.

The Minister of State Department of Health, Philip Dunne spoke about the Rare Disease Strategy in relation to Europe and Globally;
“I am pleased to say that the UK is a recognised leader on many rare diseases. We are an active member of the International Rare Diseases Research Consortium and have been actively involved in the establishment of 24 European Reference Networks—ERNs—for Rare Disease, six of which we are leading on. I was at an informal meeting of EU Ministers early last week, where our role in punching above our weight for the ERNs was widely acknowledged.”

He concluded;
“I want to respond specifically to the challenge posed by my Hon. Friend and the Shadow Minister on the real need to ensure that the commitments set out in the UK Rare Disease Strategy are fully realised. It is right that last week in the House, my Hon. Friend the Under-Secretary of State for Public Health and Innovation made a personal commitment to that effect in her response to my Hon. Friend’s Oral Question, and I am happy to reiterate that commitment today. I can confirm to the House that I have agreed with the Chief Executive of NHS England that by the end of this year he will deliver an implementation plan for those of the 51 commitments of the UK Strategy for Rare Diseases for which NHS England has lead responsibility. For those commitments that fall outside NHS England’s remit, the Department will work collaboratively across stakeholders to contribute to the implementation plan. I am sure my Hon. Friend will agree that the development of that plan will be a significant step in the journey.”

To see a full transcript on entire debate, CLICK HERE

Alternatively you can watch the televised debate on Parliament TV from 16:25 onwards HERE. 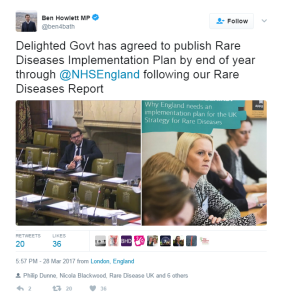 Genetic Alliance UK and Rare Disease UK provide the Secretariat to the APPG. Read their briefing for the debate HERE.